As one of the clean and pollution-free new energy sources, solar energy has broad development prospects. The basic principle of solar power generation is to use the photoelectric effect. The solar power generation system is composed of solar cells, solar controllers, and batteries. Its function is to convert the sun's radiation capacity into electric energy, or send it to the storage battery for storage, or drive the load to work. The quality and cost of solar panels will directly determine the quality and cost of the entire system. Solar power generation has many advantages, such as safety and reliability, long life, no noise, no pollution, solar energy everywhere; no geographical restrictions, no fuel consumption, no mechanical conduction parts, low failure, easy maintenance; it can be unattended , The construction period is short, the scale is arbitrary, there is no need to erect transmission lines, and it can be easily combined with buildings. These advantages are beyond the reach of conventional power generation and other methods, but solar power generation has the shortcomings of intermittent, unstable and uncontrollable. In addition, the solar panel has a limited life span, about 10 to 20 years, and the large amount of silicon, germanium, and boron required for production may cause other pollution.

Wind power technology is a technology that converts wind energy into electrical energy. It uses wind to drive the rotation of windmill blades, and then increases the speed of rotation through a speed increaser to encourage generators to generate electricity. Wind turbines generally consist of wind wheels, generators, direction regulators, towers, speed-limiting safety mechanisms and energy storage devices. The working principle of wind turbines is simple. The wind turbine rotates under the action of wind to control the kinetic energy of the wind. It is transformed into mechanical energy of the wind wheel shaft, and the generator rotates to generate electricity under the drive of the wind wheel shaft. Since the wind speed in nature is extremely unstable, and the output power of wind turbines is also extremely unstable, the electrical energy generated by wind turbines generally cannot be used directly in electrical appliances, and must be stored first 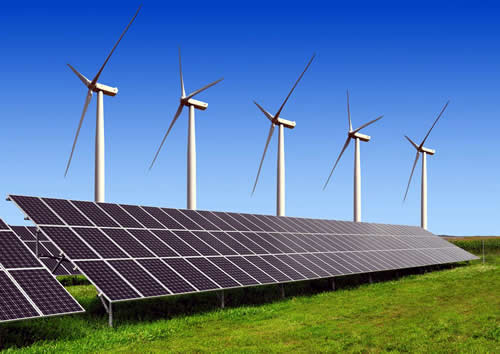 Geothermal is a kind of clean and renewable energy. The earth is a huge thermal warehouse. The internal thermal energy continuously flows out of the surface through hot water, steam, dry heat and other forms, providing abundant and cheap energy for mankind. Geothermal power generation uses the medium and high temperature heat above the boiling point to directly enter and drive the steam turbine, and drive the generator to generate electricity or heat a certain low-boiling working fluid through heat exchange with geothermal heat to turn it into steam, and then enter and drive the steam turbine , Drive the generator to generate electricity.